Mercury Jets is an on demand air charter provider specializing in private jet charter and services in Amsterdam, Netherlands. Our team is composed of industry leading professionals dedicated to providing our customers with the ultimate air charter experience. We are committed to safety, reliability and white glove customer service. To obtain a charter quote tailored to your specific needs, please fill in the request form or call our agents 24/7 at +1-212-840-8000.

Amsterdam is the capital and largest city of the Netherlands located in the western part of the country. With its chief port, it is the center of the country’s largest metropolitan area and the center of the financial, commercial, industrial, and cultural activities. Founded in the 13th century as a small fishing village, by 17th century Amsterdam was developed as one of the most powerful trade centers in the world.

Amsterdam is one of the great commercial centers of Europe, and a home to one of the world’s oldest stock exchanges. It is also known as a major center for the diamond-cutting industry. Amsterdam’s economy is mainly based on the banking, tourism, media, minerals, chemical, automobile, electronics, service industry, shipping, clothing, and horticulture. There are the headquarters of several large international companies, such as Philips, Royal Bank of Scotland, DotNetNuke, Heineken, Fonterra, ING Group, AkzoNobel, and Teleplan. Built on about 100 islands within a network of canals, Amsterdam is a city almost latterly floating on water and is often called the “Venice of the North”.

Being the cultural capital of the Netherlands, Amsterdam boats a plenty of recreational, cultural, architectural and historical sights, including wonderful museums, great art collections, charming canals and world-famous events and festivals. The most famous places of interest include the Stedelijk Museum, Van Gogh Museum, Anne Frank’s House, Rijksmuseum, Oude Kerk, Royal Palace, Amsterdam Historical Museum, Begijnhof, Magere Brug, Rembrandtplein, Jordaan, Leidseplein, and much more. There are also the beautiful and unique canals that are a symbol of Amsterdam. 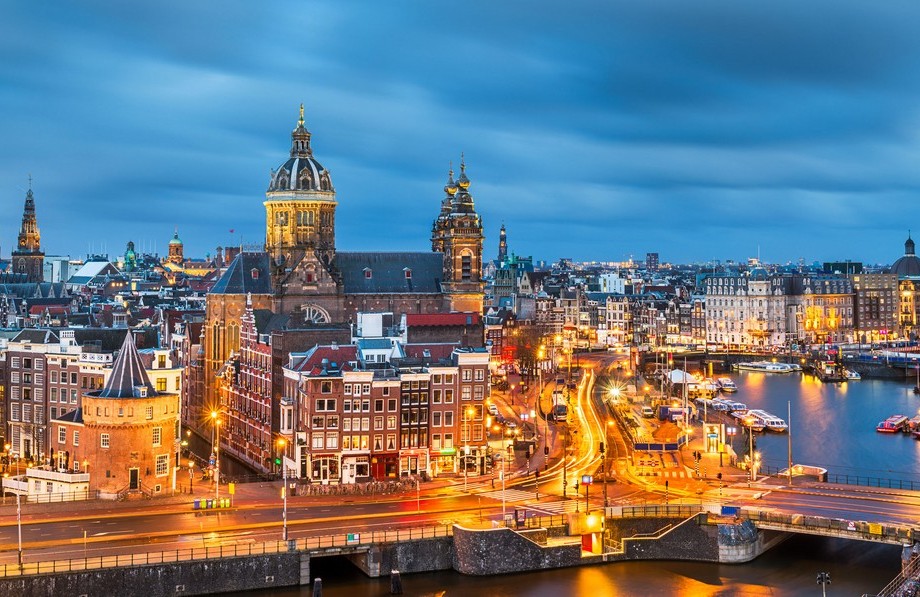 How much does it cost to charter a private jet to Amsterdam?

Everyone knows about the capital of the Netherlands, the colorful city of Amsterdam as a popular tourist destination and an important business center of the region. The price of a charter jet in Amsterdam usually depends on the size and type of the aircraft. You can get more information from our consultants. You can also get an approximate private jet charter Amsterdam price with our charter flight cost calculator.

Here are some target prices for private jet charter flights to or from Amsterdam:

Which aircraft should I choose Amsterdam charter flights?

With a proven fleet of private jets, you can always book the perfect aircraft for air charter in Amsterdam. We can offer you a wide range of aircraft types and sizes for your comfort. When booking a charter jet to Amsterdam you need to consider the number of passengers on board and the range of the flight. The most popular types for charter flights in this destination are light jets, midsize jets, and heavy jets.

How to book a private jet charter in Amsterdam?

Book your next charter flight to Amsterdam and get a unique and flexible way to reach your destination in total comfort. By traveling on a charter jet to Amsterdam, you can fly at your convenience without worrying about your safety. Attention to detail, individual needs, and a commitment to passenger safety are top priorities of our team.

How to book an Amsterdam empty leg flight?

An empty leg flight is a popular way of traveling in today’s world. When a private charter plane has disembarked and there are no passengers booked for the return flight, you can travel on a private jet charter in Amsterdam with all the benefits of a private flight. For further information please contact our consultants.

Are there any advantages to private jet charter flights to Amsterdam?

The modern business jets are equipped with Wi-Fi, satellite phones, full working areas, and much more. In addition, seats, sleeping areas, showers, and a spacious luggage compartment can be found onboard. You can let us know in advance what your needs are, and our consultants will help you find the perfect aircraft for you.

How much luggage can I take on my Amsterdam private jet charter?

The amount of luggage you can take usually depends on the size of the aircraft, the weight of your luggage, and the number of passengers. When traveling by private jet, you may also take oversized luggage such as skis or snowboards with you, if necessary. For more information, please ask our consultants.

Private jet passengers travel with much more freedom, convenience, and comfort to where they want to go, at a time of their choosing. If you don’t find the answers to all of your important questions here, you can contact one of our experts or visit our private jet charter FAQ page.