Mercury Jets is an on demand air charter provider specializing in private jet charter and services in Manaus. Our team is composed of industry-leading professionals dedicated to providing our customers with the ultimate air charter experience. We are committed to safety, reliability, and white glove customer service. To obtain a charter quote tailored to your specific needs, please fill in the request form or call our agents 24/7 at +1-212-840-8000.

About Manaus and Places to Visit

Situated in the heart of the Amazon Rainforest, Manaus is the capital city of Amazonas, a state in northwestern Brazil. Manaus was once the wealthiest city in Brazil in the late 19th Century because of a rubber boom. Today, Manaus plays an important role in Brazil’s economy as a major inland port city on the Negro River.

Manaus is a destination for exploring lively street markets and tasting the delicious flavors of locally grown foods. This is a popular destination for taking in the sights and sounds of the market and bustling harbor, especially when music from live performers fills the air.

Manaus has several iconic attractions to explore. One of the most iconic buildings in Manaus is the Amazonas Theatre (The Teatro Amazonas). The theatre was built in 1896 in a French architectural style. Another iconic building is Palacio Rio Negro, the former mansion of a German rubber baron. Today the mansion serves as the official office of the Amazonas province.

The Amazon River attracts eco-tourists to Manaus from all over the world. The Amazon flows from the Andes Mountains of Peru through six countries, including Brazil. The river travels more than 4,000 miles before it reaches the Atlantic Ocean. Another popular attraction in Manaus is a natural phenomenon that locals refer to as the “Meeting of the Waters.” The waters of the Rio Negro and Amazon River (referred to as the Solimões River in Brazil) meet but do not mix because of differences in temperature, speed, and the number of dissolved sediments in each river.

Adventure seekers can climb the trees of the Amazon Rainforest. As climbers ascend into the canopy from the forest floor, they witness a rarely seen world that is home to exotic plants, birds, and animals found only in the heart of the Amazon. If you prefer to keep your feet on the ground, take a stroll through Paco da Liberdade, the oldest part of Manaus, where the architecture and cobblestone streets are reminiscent of Europe.

The primary airport that serves the area is Manaus International Airport – Eduardo Gomes (SBEG). The airport is located 8 miles (12.6 km) from downtown Manaus. 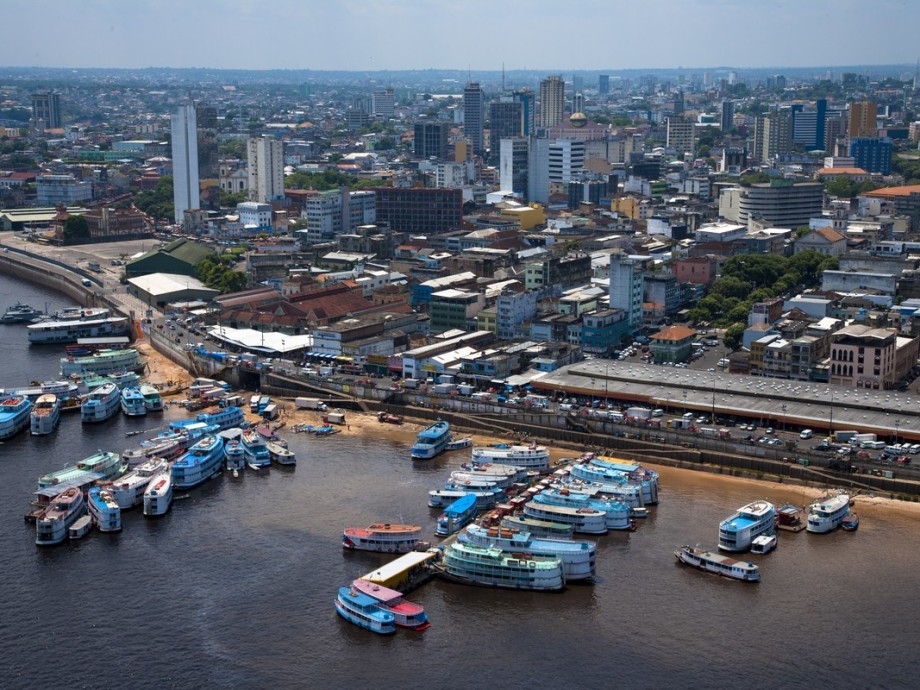