I know the title alone is enough to make some cringe. It conjures thoughts of earplugs and maintaining as much distance as possible from the offender. However, I thought it would be an important topic to discuss as there are important safety considerations. I’ll begin with crying. Infants and young children tend to cry when flying, typically on descent. This is due to the aircraft’s pressurization system. Infants and young children are sensitive to pressure changes as their ear canals are smaller and their eardrums and other organs less developed.

On takeoff, the pressure in the cabin decreases as the “cabin altitude” (apparent altitude as dictated by the air pressure inside the cabin) increases. This is less likely to cause discomfort. Upon descent, the pressure increases as the cabin altitude decreases. As the pressure mounts, the air pressure within the ears and against the eardrum cause popping and we have all experienced it. This is enough to cause pain in infants and small children, hence the crying. This can be alleviated by giving them candy or chewing gum. For infants, bottle-feeding is an option.

Crying isn’t always due to ear issues. It can be because of any sort of discomfort, such loud noise, being immobile, etc. So, entertainment is a necessity here. Try to bring along something to entertain the child during the flight. Also, do your best to be mindful as whether the seat in front is being kicked or if the child is interfering with others. It may be easy to become immersed in a book and not notice your child kicking the seat in front. Finally, I will touch on the subject of lap children. The FAA allows children under the age of two to be seated in the lap of a guardian without having to purchase a seat. The guardian may simply hold the child for the duration of the flight. This situation should be avoided whenever possible. I recommend using an FAA approved child seat (the seat will have a label or statement somewhere saying the device is usable on aircraft). In the event of an accident involving the airplane, the g-forces involved will likely make it impossible for an adult to restrain the child.

Flying with children can be difficult and the extra items needed to pacify them difficult to carry but if you can take a little extra time to ease the child’s discomfort, it will pay off for everyone on board. It will also allow the child to have a more comfortable flight as well. If the child is comfortable, you might be as well. 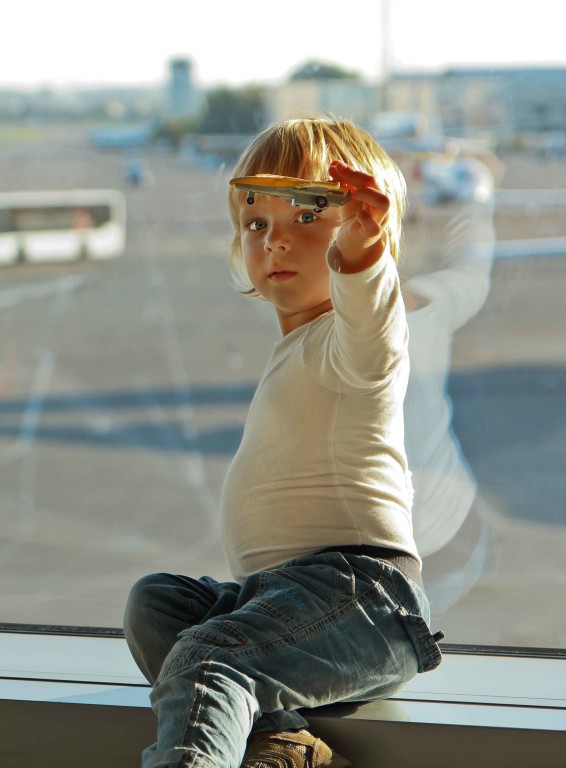