Families who fly from the Big Apple to Indiana’s capital city enjoy the city’s many points of interest including the Indianapolis Botanical Garden and Zoo Indianapolis. The city is most famous for the Indianapolis 500-Mile Race, an automobile race that has been held annually for more than a century at Indianapolis Motor Speedway. The event is held over Memorial Day weekend and draws hundreds of thousands of spectators from all over the world.

Indianapolis Regional Airport (MQJ) is a public use airport in Hancock County, Indiana, 12 nautical miles east of the central business district of Indianapolis.

Super Midsize jet options for private charters from Fort Lauderdale to Indianapolis include the Citation X, Bombardier Challenger 350 and the Dassault Falcon 50EX, among others. Super midsize jets transport a maximum of 12 passengers and feature a stand-up cabin, luggage space and ample legroom.

Midsize jet options for private jet charters from Fort Lauderdale to Indianapolis include the Hawker 850XP, Cessna Citation XLS+ and the Learjet 60XR.

The Hawker 850XP can fly passengers up to 2,642 nautical miles at a maximum altitude of 41,000 feet. The jet is the ultimate combination of performance and utility.

Clients continually request the Citation series. The Citation XLS+ can take off in 3,560 feet. This takeoff performance is among the shortest takeoff distances in the midsize class. The jet can climb to a comfortable cruising altitude in under 15 minutes.

Private jet clients who prefer a combination of the best of technology and comfort for business or leisure travel select the Learjet 60XR. This high-performing jet has a range of 2,405 miles and it climbs fast, to 41,000 feet in 18.5 minutes at maximum weight.

Light jets offer a cost-effective charter option configured for speed and efficiency. Light jets provide flexible access to smaller regional airport runways and rank among the most agile and efficient ways to travel on private air charters. Light jet options seat up to seven passengers comfortably. Popular light jet choices include the Learjet 75, the Beechcraft Premier 1A, and the Phenom 300.

The Learjet 75 is configured for speed, utility and comfort. The Learjet 75 can fly at Mach 0.80 with a range of more than 2,040 miles. Charter clients select the Learjet 75 for its state-of-the-art cabin management system with amenities that include a high-definition bulkhead monitor, integrated sidewall speakers, and six personal touch-screen monitors that stow or deploy as needed.

The Beechcraft Premier 1A can transport up to six passengers in one of the largest cabins in its class, with plenty of cabin space to move about comfortably. The Premiere 1A’s seating is designed to help passengers remain well-rested for their arrival in the Hoosier State.

Embraer’s Phenom 300 is the best-selling light business jet and is known amongst private charter clients for is speed, efficiency and range of more than 2,268 miles. The Embraer 300’s cabin elegant design features comfortable seating configured for productive meetings or relaxation.  With a generous baggage capacity, charter clients will be prepared with everything they need for their stay in Indianapolis. 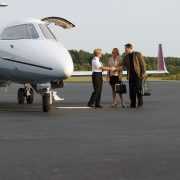 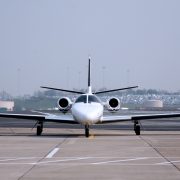 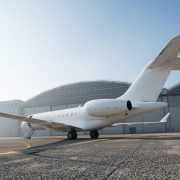