A true jewel of the French Côte d’Azur, the resort city of Nice is one of the most beautiful places in the world. It has a warm gentle sea, spectacular coastline, and mild climate which attracts visitors all year round. Travelers on charter flights from Oslo to Nice can quickly and with maximum comfort find themselves on the Mediterranean coast. Chartering a private jet to Nice will provide privacy and comfort for each passenger in your group.

Charter a private jet from Oslo to Nice

Airport Distances and Flight Times from Oslo to Nice

How much does a private jet cost from Oslo to Nice?

Heavy jets including the Falcon 8X, Challenger 650, and Gulfstream G650 are selected by private charter clients for the charter route from Oslo to Nice.

The Falcon 8X is a long-range jet that meets basic business aviation standards. Engine improvements give the 8X an incredible range of 6,450 nm, and it can comfortably carry up to 16 passengers. The aircraft is equipped with state-of-the-art technology, allowing passengers to relax on group charter flights from Oslo to Nice.

The Challenger 650 business jet with a spacious cabin has a new interior, upgraded engines, and improved avionics. The cabin can accommodate up to 10 passengers in extra comfort on special wide seats or a sofa.

The Gulfstream G650 from Gulfstream Aerospace is the first aircraft with a large cabin, offers a considerable range, and has access to challenging airports.  The aircraft can cross virtually any continent and carry up to 19 passengers.

Midsize jet options include the Hawker 850XP, Citation XLS+, and Learjet 60XR for private charters from Oslo to Nice.

The Hawker 850XP has the best aerodynamic performance in its class and is equipped with upgraded engines. It has everything a passenger needs for medium-haul flights.  Moreover, it can also carry up to 8 passengers with a range of 2,642 nm.

The Citation XLS+, an upgraded version of the Cessna XLS, is capable of carrying 9 passengers up to 2,100 nm. It has long been enshrined as the world’s most popular jet aircraft. The model is certified to take off from a dirt runway and has access to remote locations.

The Learjet 60XR business jet is a medium-sized jet that can carry up to 8 passengers. It is the largest of the Learjet with an elongated fuselage and new fuel-efficient engines. The aircraft can fly non-stop up to 2,269 nm and carry up to 7 passengers. All these features are designed to make your private jet to Nice as comfortable as possible.

Light jet options for private charters from Oslo to Nice include the Citation CJ4, Phenom 100E, and Learjet 75.

The popular Citation CJ4 is a light jet designed by Cessna. It was introduced in October 2006 and quickly gained popularity in the business aviation segment. The aircraft is capable of providing excellent service for 10 passengers and covering distances of 2,165 nm.

The Phenom 100E is the entry-level aircraft of Brazilian aerospace manufacturer Embraer and can be flown faster than any other aircraft in its class.  It has a range of 1,178 nm and will easily take you to Nice when traveling short distances.

The Bombardier Learjet 75, an innovative light jet platform, has been in production since 2013. The aircraft has improved flight performance due to more powerful engines and can reach higher speeds of 0.81 Mach. It is considered one of the best choices among private jets to Nice and shows a range of 2,040 nm.

The fastest way to start a private flight to Nice from Oslo, contact our consultants. Nice is the most popular seaside city in the world and has many memories of past centuries. It is regarded as a top-level resort, where a variety of cultural treasures, tourist attractions, and rich nature make for an unforgettable vacation. Book a private jet Nice in the best way for you by contacting our consultants. 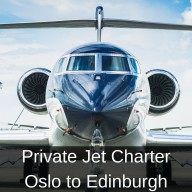