The metropolitan area of Phoenix is located in southern Arizona’s Valley of the Sun. A hot spot in the U.S., Phoenix is known for its year-round sunshine and warm temperatures. Some of the nation’s largest organizations are based in Phoenix and the city also has an impressive list of attractions for leisure travelers, including Desert Botanical Garden, Camelback Mountain, Phoenix Zoo and a vibrant arts district.

Heavy jet options for private charters from Atlanta to Phoenix include the Dassault 7x, Falcon 900LX and the Gulfstream G650.

The Dassault 7x is one of the fastest and most requested jets in its class for private charter clients flying from Atlanta to Phoenix. This jet has a lower fuel consumption, up to 30% lower than other jets in its class, dramatically lowering operating costs.

Gulfstream’s G650, among the fastest in Gulfstream’s fleet, can travel at 92% of the speed of sound and has a maximum range of more than 7,000 miles. Typical cabin configurations include seating for up to 19 passengers and a configuration for overnight flights that include sleeping accommodations for up to 10. The G650 provides a comfortable, smooth flight from Atlanta to Phoenix.

Super Midsize jet options for private charters from Atlanta to Phoenix include the Hawker 1000, Bombardier Challenger 350 and the Citation Sovereign, among others.

The Citation Sovereign provides clients with a superior experience for the flight to Phoenix. The Sovereign has an excellent takeoff capability and enhanced technology features private charter clients seek.

Midsize jet options for private charters from Atlanta to Phoenix include the Hawker 850XP, Citation XLS+ and the Learjet 60XR.

Mercury Jets’ on-demand white glove charter coordinators can assist you in choosing your preferred aircraft. To book a flight, call +1-212-840-8000 for our charter department. Mercury Jets offers an instant quote request. Submit your request here to price out your flight immediately. 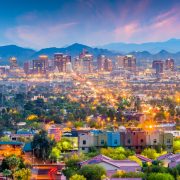 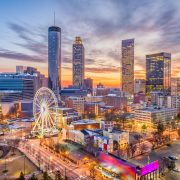 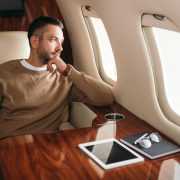