Many people agree that Moscow is known for many things: the onion-shaped cathedrals, Red Square and having Moscow noted as one of Russia’s two federal cities. It has over 13 million people living inside the city’s borders and was home to tsars along with influential people, such as journalist Marsha Gessen and author Dmitry Glukhovsky. Russia’s deep history shaped the country’s culture, art, and lifestyle in modern society.

Despite all the hassle, this country encountered throughout the years, one thing always stays the same: people around the world are fascinated by Moscow’s charm in whetting people’s imaginations and curiosity. Book a flight into the capital and you also will understand Politician Bob Schaffer quote, “The Russians have a lot at stake, and the power of Moscow pride should never be underestimated.”

Finished in 1560 as a military victory mark over Mongols, this building stands tall as it also becomes a museum to the modernized world. Its notable characteristics are colorful onion-shaped domes so this majestic architecture is not hard to miss.

This auditorium reopened in 2011 after a long renovation to its former imperial luster after neglect from the communist Soviet Union. Experience the aristocratic lifestyle while watching opera and ballet. This industry runs on a booking system, so you need to reserve early whenever possible because tickets sell out months in advance.

Observe over 1,300 of Russia’s greatest artwork that ranges from the 11th century to the early 20th century. Modern works that are around 100 years ago can be explored in the New Tretyakova.

A cozy atmosphere whose menu blends traditional Russian recipes with English cuisines and craft alcohol. This place is best described as a British pub with a Russian angle.

For those who want a luxurious dining experience, this is the place to go. They have English speaking waiters and serve international cuisine based on Europe, Eastern Europe, and Russian recipes.

Dine like the 19th-century nobles in a pre-revolutionary house. This restaurant serves classical Russian cuisine.

Take a boat tour in this waterway for picture-worthy sights. If you want to gawk the beauty around you, a riverside stroll should fit the bill.

A Wi-Fi equipped epicenter, this area has more to offer than a traditional park. It also has cafes, outdoor cinema, lounge chairs, yoga and dance classes while showcasing Stalin’s imperial style with the concrete strip for tanks.

Enjoy the simpler life by taking a trip to a “rynok.” The scent and sight of the countryside are memorizing without leaving the city.

Moscow private jet charter is the easiest and fastest way to visit one of the best cities in Russia. 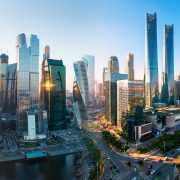 3 Events to Attend This Weekend in Moscow with Mercury Jets